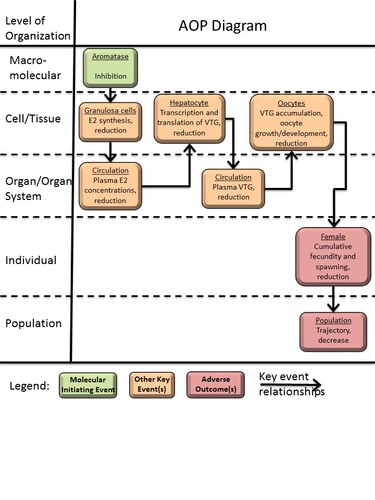 This adverse outcome pathway details the linkage between inhibition of gonadal aromatase activity in females and reproductive dysfunction, as measured through the adverse effect of reduced cumulative fecundity and spawning. Initial development of this AOP draws heavily on evidence collected using repeat-spawning fish species. Cumulative fecundity is the most apical endpoint considered in the OECD 229 Fish Short Term Reproduction Assay. The OECD 229 assay serves as screening assay for endocrine disruption and associated reproductive impairment (OECD 2012). Cumulative fecundity is one of several variables known to be of demographic significance in forecasting fish population trends. Therefore, this AOP has utility in supporting the application of measures of aromatase, or in silico predictions of the ability to inhibit aromatase, as a means to identify chemicals with known potential to adversely affect fish populations and potentially other oviparous vertebrates.

Support for the essentiality of a number of key events in the AOP was provided by several time-course, stop-reversibility, experiments with fathead minnows exposed to aromatase inhibitors.

1. Villeneuve et al. 2009 and 2013 examined a time-course of key event responses to fadrozole as well as the time-course of recovery following cessation of fadrozole delivery. Once fadrozole was removed from the system, ex vivo E2 production increased, followed by increases in plasma E2 concentrations, and then increases in plasma vitellogenin concentrations. Additionally, while exposure to the chemical was on-going, compensatory up-regulation of CYP19a1a gene expression resulted in increases in ex vivo E2 production, followed by increased plasma E2 and plasma VTG. The essentiality of aromatase inhibition relative to impaired E2 production was further supported by the observation of an "overshoot" in E2 production, relative to controls, shortly after cessation of fadrozole delivery.

2. Similar support was provided in a study by Ankley et al. (2009a). Cessation of prochloraz delivery resulted in rapid recovery of ex vivo E2 production and plasma E2 concentrations, with recovery of vitellogenin concentrations lagging slightly behind. Increased expression of cyp19a1a mRNA during the exposure period aligned with increased ex vivo E2 production, and increased plasma E2, compared to the first day of exposure.

• Aromatase, inhibition: [Strong] There is good evidence from stop/reversibility studies that ceasing delivery of the aromatase inhibitor leads to recovery of the subsequent key events.

• 17beta-estradiol synthesis by ovarian granulosa cells, reduction: [Strong] In both exposure studies and stop/reversibility studies, when ex vivo E2 production (as measure of this KE) recovers either through compensation or due to removal of the stressor, subsequent KEs have been shown to recover after a lag period.

• plasma 17beta-estradiol concentrations, reduction: [Strong] In both exposure studies and stop/reversibility studies, when plasma E2 concentrations recover either through compensation or due to removal of the stressor, subsequent KEs have been shown to recover after a lag period.

• vitellogenin production in liver (transcription, translation), reduction: [Moderate] This endpoint was not specifically examined in stop/reversibility studies with aromatase inhibitors, but biological plausibility provides strong support for the essentiality of this event.

• plasma vitellogenin concentrations, reduction: [Strong] Shown to recover in a predictable fashion consistent with the order of events in the AOP in stop/recovery studies.

• vitellogenin accumulation into oocytes and oocyte growth/development, reduction: [Weak] Some contradictory evidence regarding the essentiality of this event. No stop/reversibility studies have explicitly considered this key event.

• cumulative fecundity and spawning, reductions: [Moderate] By definition, some degree of spawning is required to maintain population.

Biological plausibility: Biological plausibility refers to the structural or functional relationship between the key events based on our fundamental understanding of "normal biology". In general, the biological plausibility and coherence linking aromatase inhibition through decreases in circulating concentrations of E2 is very solid. The biochemistry of steroidogenesis and the predominant role of the gonad in synthesis of the sex steroids is well established. Similarly, the role of E2 as the major regulator of hepatic vitellogenin production is widely documented in the literature. The direct link between reduced VTG concentrations in the plasma and reduced uptake into oocytes is highly plausible, as the plasma is the primary source of the VTG. However, the direct connection between reduced VTG uptake and impaired spawning/reduced cumulative fecundity is more tentative. It is not clear, for instance whether impaired VTG uptake limits oocyte growth and failure to reach a critical size in turn impairs physical or inter-cellular signaling processes that promote release of the oocyte from the surrounding follicles. In at least one experiment, oocytes with similar size to vitellogenic oocytes, but lacking histological staining characteristic of vitellogenic oocytes was observed (R. Johnson, personal communication). Regulation of oocyte maturation and spawning involves many factors other than vitellogenin accumulation (Clelland and Peng, 2009). At present, the link between reductions in circulating VTG concentrations and reduced cumulative fecundity are best supported by the correlation between those endpoints across multiple experiments, including those that impact VTG via other molecular initiating events (Miller et al. 2007).

Concordance of dose-response relationships: Dose response concordance considers the degree to which upstream events are shown to occur at test concentrations equal to or lower than those that cause significant effects on downstream key events, the underlying assumption being that all KEs can be measured with equal precision. There are a limited number of studies in which multiple key events were considered in the same study. These were considered the most useful for evaluating the concordance of dose-response relationships. In general, effects on downstream key events occurred at concentrations equal to or greater than those at which upstream events occurred (Concordance table: [1]). However, there are exceptions. There are cases where no significant effects on estradiol synthesis by ovarian granulosa cells (ovary explants) were observed, but significant effects on plasma E2 or VTG concentrations were observed. Likewise, there are cases where impacts on plasma VTG were observed at concentrations lower than those reported to reduce plasma E2 concentrations. Based on knowledge of the studies in question, the apparent lack of concordance in some cases is driven by two primary factors. First, differences in the sensitivity and dynamic range of the measurements being made. Second, the effects of compensatory responses along the HPG axis. For instance, although ex vivo E2 production is rapidly affected by exposure to fadrozole, it is also a response that is more rapidly corrected through upregulation of aromatase transcripts (see Villeneuve et al. 2009), meaning that it recovers more quickly than plasma concentrations of E2 or plasma VTG concentrations. Thus, at certain time points, one can get an apparent effect on plasma E2 or T without a measurable impact on E2 production by the gonad tissue, because the upstream insult occurred earlier in time and was subsequently offset by a compensatory response, but the compensation has yet to propagate through the pathway. Sensitivity and dynamic range of the measurement methods is also an issue. Vitellogenin concentrations have a highly dynamic range and can change by orders of magnitude. Other endpoints like plasma steroids are regulated in a narrower range, making differences more difficult to distinguish statistically. Therefore, in our assessment, the deviations from concordance do not call the KERs into question.

The concentration-dependence of the key event responses with regard to the concentration of aromatase inhibitor has been established in vitro and/or in vivo for nearly all key events in the AOP.

Temporal concordance: Temporal concordance refers to the degree to which the data support the hypothesized sequence of the key events; i.e., the effect on KE1 is observed before the effect on KE2, which is observed before the effect on KE3 and so on. Temporal concordance of the AOP from aromatase inhibition to decreased E2 production, decreased circulating E2, and decreased plasma VTG concentrations has been established (e.g., (Villeneuve et al. 2009; Ankley et al. 2009a; Skolness et al. 2011). Temporal concordance has not been established beyond that key event, in large part due to disconnect in the time-scales over which the events can be measured. For example, most small fish used in reproductive toxicity testing will can spawn anywhere from once daily to several days per week. Given the variability in daily spawning rates, it is neither practical nor effective to evaluate cumulative fecundity at a time scale shorter than roughly a week. Since the impacts at lower levels of biological organization can be detected within hours of exposure, lack of impact on cumulative fecundity before the other key events are impacted cannot be effectively measured. Overall, among those key events whose temporal concordance can reasonably be evaluated, the temporal profile observed is consistent with the AOP.

Consistency: We are aware of no cases where the pattern of key events described was observed without also observing a significant impact on cumulative fecundity. The final adverse outcome is not specific to this AOP. Many of the key events included in this AOP overlap with AOPs linking other molecular initiating events to reproductive dysfunction in small fish.

Uncertainties, inconsistencies, and data gaps: The current major uncertainty in this AOP is whether there is a direct biological linkage between impaired VTG uptake into oocytes and impaired spawning/reduced cumulative fecundity. Plausible biological connections have been hypothesized, but have not yet been tested experimentally.

Assessment of quantitative understanding of the AOP:

At present, quantitative understanding of the AOP is approaching the point where an in vitro measurement of aromatase inhibition could be used as an input parameter into a series of coupled computational models that could generate quantitative predictions across multiple key events (e.g., circulating E2 concentrations, circulating VTG concentrations, predicted impacts on cumulative fecundity, and effects on population trajectories). A sequence of supporting models has been coupled together and predictions have been made for novel aromatase inhibitors (identified through high throughput in vitro screening), but those predictions have not yet been validated experimentally. The present models are also unable to account for pharmacokinetic considerations (e.g., adsorption, distribution, metabolism/biotransformation, and elimination) and have demonstrated only partial success in simulating compensatory/feedback responses to aromatase inhibition (e.g., (Breen et al. 2013).

16. Baker ME. 2011. Origin and diversification of steroids: co-evolution of enzymes and nuclear receptors. Molecular and cellular endocrinology 334(1-2): 14-20.

38. A A, A G. 2003. Eggshell and egg yolk proteins in fish: hepatic proteins for the next generation: oogenetic, population, and evolutionary implications of endocrine disruption. Comparative Hepatology 2(4): 1-21.