A name that succinctly summarises the information from the title. This name should not exceed 90 characters. More help
Increased TNF leading to GDM 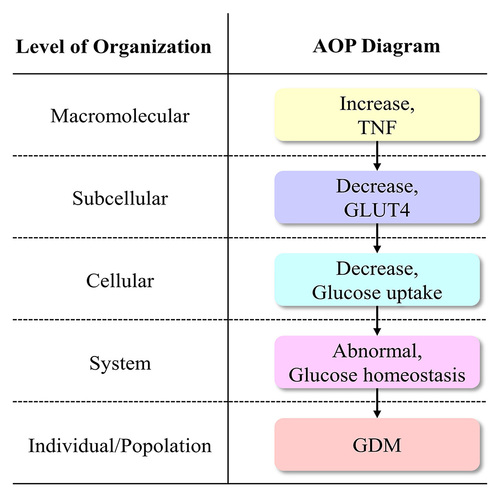 Some epidemiologic studies have found an association between exposure to environmental endocrine disruptors (EDCs) and gestational diabetes mellitus (GDM). There is considerable uncertainty on the effects of EDCs exposure to GDM, which may be decreased if its underlying mechanism becomes clearer. This project aims to construct an AOP of GDM for supporting the investigation of the mechanism between environmental chemicals and GDM.

This preliminary AOP has the potential to predict the connections between environmental chemicals and GDM, prioritizing the chemical's subsequent molecular mechanism studies. Further efforts will be focused on identifying quantitative relationships of KERs and incorporating other typical chemicals for external validation to increase the confidence of this AOP.