A name that succinctly summarises the information from the title. This name should not exceed 90 characters. More help
CYP26 inhibition leads to neural tube closure defects 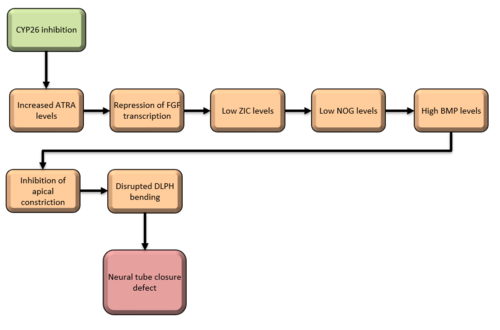 The user responsible for managing the AOP entry in the AOP-KB and controlling write access to the page by defining the contributors as described in the next section.   More help
Cataia Ives   (email point of contact)

ATRA gradients play critical roles in early embryonic cell differentiation, and are regulated in time and space throughout embryo development. In the neural tube ATRA as a differentiation inducer counteracts the activity of fibroblast growth factor (FGF) which stimulates cell proliferation. Opposite gradients of ATRA and FGF direct development along the rostro-caudal axis of the vertebrate embryo. It is the local balance between ATRA-producing retinol dehydrogenase families and ATRA-metabolizing cytochrome P450 family 26 (CYP26) enzyme families that determines local ATRA concentrations. This interaction is controlled in the somites through direct transcriptional repression of FGF by ATRA and FGF-induced expression of zinc finger proteins 1 and 3 (ZIC1 and ZIC3 respectively), which induce the expression of CYP26 enzymes (Heusinkveld et al. 2021).

Inhibition of CYP26 causes the local ATRA concentrations to rise, which reduces local FGF levels due to an increase in transcriptional repression of FGF by ATRA and causes a reduced expression of ZIC1 and ZIC3. The reduced amount of ZIC proteins result in a lower amount of noggin (NOG) in the neuroectoderm. Noggin (NOG) inhibits BMP binding to its receptor, which crucial for proper hinge formation In the DLHP (Heusinkveld et al. 2021).

In chick embryos was demonstrated that intermediate amounts of BMP signaling in the neural plate is required for proper hinge point size and location. Complete loss of BMP caused ectopic and exaggerated DLHPs to form. In contrast, an increase in BMP signaling results in protein recruitment that serve to stabilize junctional proteins, which represses apical constriction and prevents bending of the DLHPs (Eom et al. 2011, 2012, 2013). Absence of DLHPs caused by loss of NOG results in severe failure in closure of the neural tube, which was demonstrated in mice (Stottman et al. 2006).

Neural tube closure is a fundamental process in vertebrate brain and spinal cord development, in which the neural plate folds up along most of its length to form a tube. Folding of the neural plate occurs at specific locations through asymmetric changes in the shapes of cells such that their apical sides contract, generating hinge points of tissue bending. The initial bending of the neural plate is mediated by the medial hinge point cells (MHP), which are anchored to the notochord beneath them and form a hinge that establishes the neural groove at the dorsal midline. Shortly thereafter, the cells at the dorsolateral hinge points (DLHPs) undergo apical constriction, causing wedge-shaped cells that bend the neural folds, bringing them in contact with each other. The neural and surface ectoderm cells from one side fuse with their counterparts from the other side, which closes the neural tube.