A name that succinctly summarises the information from the title. This name should not exceed 90 characters. More help
CerS leads to NTDs 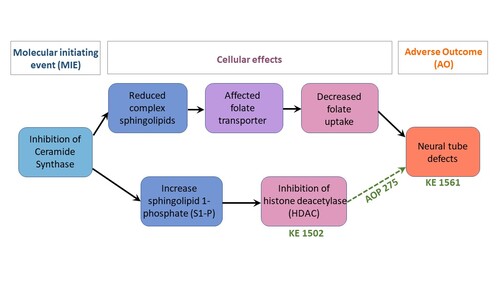 Defects in neural tube formation during early embryogenesis are congenital malformations that may lead to morbidity or lethality (Finnell et al., 2021; Isaković et al., 2022). The etiology of  neural tube defects (NTDs) is not fully understood, but many studies highlight the role of environmental factors, in addition to genetic risks (Finnell et al., 2021; Isaković et al., 2022). Higher incidence of NTDs was observed in regions where higher frequency of fumonisin FB1 in maize was also reported (Hendricks, 1999; Marasas et al., 2004; Moore et al., 1997). This circumstantial evidence suggests possible associations between FB1 exposure and NTDs, that are further supported by a case-control study in human and several animal studies (Gelineau-Van Waes et al., 2005; Marasas et al., 2004; Missmer et al., 2006; Voss et al., 2014). FB1 is a well established inhibitor of the ceramide synthase (CerS) (Wang et al., 1991), a central enzyme in sphingolipid metabolism. This AOP has therefore been developped to depict the key events leading from CerS inhibition and perturbations in sphingolipid metabolism to NTDs. It is largely based on the mode of action description in the EFSA Scientific opinion on fumonisins (EFSA et al., 2018) and proposes two routes. The first route involves effects on folate uptake - the role of folate in preventing NTDs is known and very well supported by many studies (Wahbeh and Manyama, 2021). The other route involves the inhibition of histone deacethylase (HDAC), and the key events leading from HDAC inhibition to NTDs are described in the AOP 275.