Glutamate (Glu) is the major excitatory neurotransmitter in the mammalian central nervous system (CNS), where it plays major roles in multiple aspects, such as development, learning, memory and response to injury (Featherstone, 2010). However, it is well recognized that Glu at high concentrations at the synaptic cleft acts as a toxin, inducing neuronal injury and death (Meldrum, 2000; Ozawa et al., 1998) secondary to activation of glumatergic N-methyl D-aspartate (NMDA) receptors and Ca2+ influx. Glu dyshomeostasis is a consequence of perturbation of  astrocyte/neuron interactions and the transport of this amino acid, as will be discussed below.

Astrocytes are critically involved in neuronal function and survival, as they produce neurotrophic factors, such as brain-derived neurotrophic factor (BDNF) and glia-derived neurotrophic factor (GDNF), as well as express two main glutamate transporters responsible for the removal of excessive Glu from the synaptic clefts (Chai et al., 2013; Sheldon et al., 2007). Glutamate is the major excitatory neurotransmitter in the CNS, playing a major role in memory and cognitive function (Platt, 1997), and Glu transporters as such prevent the overstimulation of post-synaptic glutamate receptors that lead to excitotoxic neuronal injury (Sattler et al., 2001; Dobble, 1999). Among the five subtypes of Glu transporters identified, glutamate aspartate transporter (GLAST) and Glu transporter-1 (GLT-1) [excitatory amino acid transporter (EAAT) 1 and 2 in humans, respectively], are predominantly expressed in astrocytes. They are responsible for the uptake of excess glutamate from the extracellular space (Furuta et al., 1997; Lehre et al., 1995; Tanaka, 2000), supported by the fact that knockdown of either GLT-1 or GLAST in mice increases extracellular glutamate levels, leading to excitotoxicity related neurodegeneration and progressive paralysis (Bristol and Rothstein, 1996). In the adult brain, EAAT2 accounts for >90% of extracellular glutamate clearance (Danbolt, 2001; Kim et al., 2011; Rothstein et al., 1995), and genetic deletion of both alleles of GLT-1 in mice leads to the development of lethal seizures (Rothstein et al., 1996). On the other hand, EAAT1-3 play a major role during human brain development, in particular in corticogenesis, where they are expressed in proliferative zones and in radial glia, and alterations of Glu transporters contributes to disorganized cortex seen in migration disorders (Furuta et al., 2005;Regan et al., 2007). Indeed, disruption of glutamate signaling is thought to be part of the etiology underlying some neurodevelopmental disorders such as autism and schizophrenia (Chiocchetti et al., 2014; Schwartz et al., 2012). Genes involved in glutamatergic pathways, affecting receptor signalling, metabolism and transport, were enriched in genetic variants associated with autism spectrum disorders (Chiocchetti et al, 2014).

Extracellular Glu released by neurons is taken up by astrocytes, which is converted into glutamine (Gln) by glutamine synthetase (GS), a thiol-containing enzyme (cf MIE, Binding to SH-/seleno containing proteins). Intercellular compartmentation of Gln and Glu, the so-called Gln/Glu-GABA cycle (GGC), is critical for optimal CNS function.13C NMR studies have demonstrated that the ratio of Gln/Glu is extremely high and increases with brain activity (Shen et al., 1999). Thus the GGC gives rise to the amino acid neurotransmitters Glu and GABA via dynamic astrocyte neuron interactions. Glu released at synaptic terminals is taken up by surrounding astrocytes via GLT-1 and GLAST (Rothstein et al., 1994; 1996). A small proportion of the astrocytic formed Gln via a reaction mediated by GS is transported into the extracellular space by Gln carriers, with a predominant role for System N/A transporter (SNAT3), which belongs to the bidirectional transporter System N (Chaudhry et al., 2002).

In addition to System N, release of Gln from astrocytes is mediated by other transport systems, including Systems L (LAT2) and ASC (ASCT2). Extracellular Gln is taken up into GABAergic and Glu-ergic neurons by the unidirectional System A transporters SNAT1 (Melone et al., 2004) and SNAT2 (Grewal et al., 2009). Once in neurons, Gln is converted to Glu by the mitochondrial enzyme phosphate-activated glutaminase (Kvamme et al., 2001). Additionally, Glu is packaged into synaptic vesicles by the vesicular VGLUT transporter (Bellocchio et al., 1998), released into the extracellular space and taken up by astrocytes where it is converted back to Gln by GS, thus completing the GGC (Fig. 1). 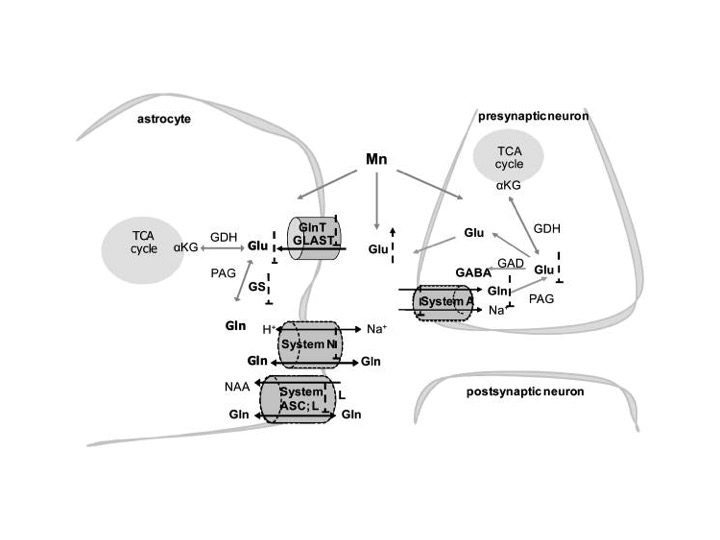 Figure 1: Schematic representation of Glu and Gln transport systems related to the GGC. From Sidorik-Wegrzynowicz and Aschner, 2013)


How It Is Measured or Detected

L-Glu transporter activities can be quantified by direct or indirect methods:

・The transport activity of the different L-Glu transporter subtypes should be determined in the presence of the appropriate inhibitors as shown in the table 1. Ex: The glutamate uptake activity via EAAT1 can be determined in the presence of dihydrokainic acid (DHK), a specific inhibitor for GLT-1, as described in Mutkus et al. (2005). Expression level of L-Glu transporter subtypes should be confirmed using Western blotting or immunocytochemistry.  It is interesting to note that pure astrocyte culture express only GLAST (EAAT1) (Danbolt et al., 2016); whereas  In mixed astrocyte and neuron cultures, GLAST (EAAT1) and GLT-1(EAAT2) are expressed (Danbolt et al., 2016). The expression of GLT1 (EAAT2) is suggested to be induced by soluble factors (Gegelashvili et al., 1997, 2000; Plachez et al., 2000; Martinez-Lozada et al., 2016).

For measuring glutamate release, load 3H glutamate for several hours and then look at release over time, as descibed in (Arizza et al., 1994)

The L-Glu concentrations in medium or in incubation buffer can be quantified by commercially-available kits quantifying the final products of the redox reaction in which L-Glu is a substrate.

The kit using the bioluminescent metabolite

Table 1 is a summary based on the reviews of Murphy-Royal et al., 2017 and Pajarillo et al., 2019, with some modification.  Concerning the physiological functions of each EAAT subtype, see the review by Danbolt (Danbolt, 2001).

The involvement of glutamate in learning and memory processes is well conserved in all taxa, from invertebrates (ex. Drosophila) to vertebrates (Fagnou and Tuchek, 1995).

Doble A. The role of excitotoxicity in neurodegenerative disease: implications for therapy. Pharmacology & therapeutics. 1999;81:163–221.

Furuta A, Rothstein JD, Martin LJ. Glutamate transporter protein subtypes are expressed differentially during rat CNS development. The Journal of neuroscience : the official journal of the Society for Neuroscience. 1997;17:8363–8375.

Regan MR, Huang YH, Kim YS, Dykes-Hoberg MI, Jin L, Watkins AM, Bergles DE, Rothstein JD. Variations in promoter activity reveal a differential expression and physiology of glutamate transporters by glia in the developing and mature CNS. The Journal of neuroscience : the official journal of the Society for Neuroscience. 2007;27:6607–6619.

Zhang X, Qu S. The Accessibility in the External Part of the TM5 of the Glutamate Transporter EAAT1 Is Conformationally Sensitive during the Transport Cycle. PLoS One. 2012; 7(1): e30961.