A name that succinctly summarises the information from the title. This name should not exceed 90 characters. More help
AR antagonism leading to short AGD 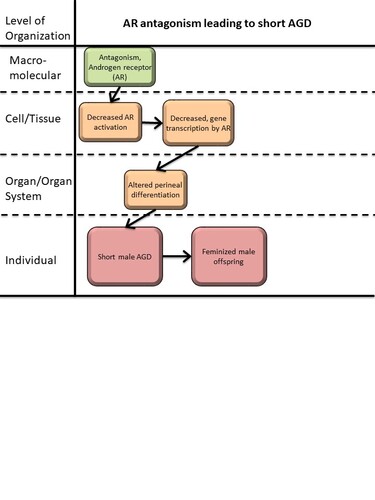 The user responsible for managing the AOP entry in the AOP-KB and controlling write access to the page by defining the contributors as described in the next section.   More help
Evgeniia Kazymova   (email point of contact)

This AOP links Androgen receptor antagonism during fetal life with short anogenital distance (AGD) in male offspring. A short AGD around birth is a marker for feminization of male fetuses and is associated with male reproductive disorders, including reduced fertility in adulthood. Although a short AGD is not necessarily ‘adverse’ from a human health perspective, it is considered an ‘adverse outcome’ in OECD test guidelines; AGD measurements are mandatory in specific tests for developmental and reproductive toxicity in chemical risk assessment (TG 443, TG 421/422, TG 414).

The AR is a nuclear receptor involved in the transcriptional regulation of various target genes during development and adulthood across species. Its main ligand is testosterone and dihydrotestosterone (DHT). Under normal physiological conditions, testosterone produced mainly by the testicles, is converted in peripheral tissues by 5α-reductase into DHT, which in turn binds AR and activates downstream target genes. AR signaling is necessary for normal masculinization of the developing fetus, including differentiation of the levator ani/bulbocavernosus (LABC) muscle complex in male fetuses. The LABC complex does not develop in the absence, or low levels of, androgen signaling, as in female fetuses.

The key events in this pathway is antagonism of the AR in target cells of the primitive perineal region, which leads to inactivation of the AR and failure to properly masculinize the perineum/LABC complex. In this instance, the local levels of testosterone or DHT may be normal, but prevented from binding the AR.