A name that succinctly summarises the information from the title. This name should not exceed 90 characters. More help
Inhibition of voltage gate during development is leading to cognitive disorders

Click links below to explore AOP 442, Inhibition of voltage gate sodium channels leading to impairment in learning and memory during development in tools offered by third parties. 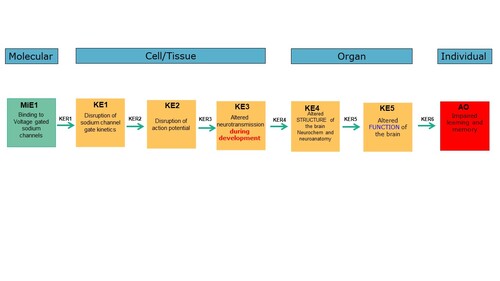 The user responsible for managing the AOP entry in the AOP-KB and controlling write access to the page by defining the contributors as described in the next section.   More help
Arthur Author   (email point of contact)

Essentiality of MIE and KE1:

Evidence from mutation and knockout models demonstrates that perturbation of VGSC function during development impairs nervous system structure and function. Knockout and mutant mouse models of sodium channel α subunits demonstrate varying degrees of adverse outcomes associated with loss or alteration of specific channel subunits. When mRNA for the Nav 1.2 subunit was reduced by approximately 85%, mice exhibited reduced levels of electrical excitability, had high levels of apoptotic neurons in the brainstem and cortex, and died from severe hypoxia within 1–2 days of birth (Planells-Cases et al., 2000).

In insects, only VGSCα are codified. Pyrethroid resistant, or knockdown-resistant houseflies are well known. As this mutation does not alter expression or localisation of the VGSC, it was suspected to alter the affinity of the channel for pyrethroids. Expression of this mutant channel in Xenopus laevis oocytes resulted in VGSCs that were 10-fold less sensitive to cismethirin as assessed using voltage-clamp experiments (Wakeling et al., 2012).

Pyrethroids, like these mutations, alter VGSC activation, inactivation and neuronal excitability. However, the mechanisms and magnitude of mutational versus pyrethroid effects are different as well as the duration of the effect.

Essentiality of KE1 and KE2:

The sodium channel modulator veratridine (VTD) produce the same effect as deltamethrin. In patch recording, this compound rapidly reduced the number of sEPSC without affecting the number of individual burst, but at higher concentration (1 mM) completely removed all sEPSC activity without affecting mEPSC frequency, similar to treatment to TTX (Meyer et al., 2008). Both events – sE(I)PSCs and mE(I)PSCs – are similar in the fact that they occur without any artificial stimulation. The difference between sE(I)PSCs and mE(I)PSCs is coming from the fact that for the sE(I)PSCs there is a chance of action potential-driven events due to intrinsic properties of presynaptic cell and/or network activity. All the mE(I)PSCs, in turn, are recorded in the presence of tetrodotoxin (TTX) which blocks action potential formation and its propagation, therefore mE(I)PSCs are more ‘spontaneous’ events than sE(I)PSCs and can be further used for the quantification of readily releasable pool size. So, it is useful to take both sE(I)PSCs and mE(I)PSCs from the same cell. First, one can record the sE(I)PSCs and then, by adding TTX into the bath solution the mE(I)PSCs. Having both sE(I)PSCs and mE(I)PSCs can help to understand where the changes in synaptic transmission are coming from, i.e. whether it is from the presynaptic side, or postsynaptic or both (Mayer et al., 2008). Titration with tetrodotoxin (TTX) produces a concentration-dependent reduction in the deltamethrin dependent calcium influx, indicating that the alteration in firing rate is consequent to the disruption in the VGSC (Cao et al., 2011).