To the extent possible under law, AOP-Wiki has waived all copyright and related or neighboring rights to KE:369

A descriptive phrase which defines a discrete biological change that can be measured. More help

The KE short name should be a reasonable abbreviation of the KE title and is used in labelling this object throughout the AOP-Wiki. More help
Uroporphyria
Explore in a Third Party Tool

Click links below to explore KE 369, Uroporphyria in tools offered by third parties.

Structured terms, selected from a drop-down menu, are used to identify the level of biological organization for each KE. More help

The KE, as defined by a set structured ontology terms consisting of a biological process, object, and action with each term originating from one of 14 biological ontologies (Ives, et al., 2017; https://aopwiki.org/info_pages/2/info_linked_pages/7#List). Biological process describes dynamics of the underlying biological system (e.g., receptor signalling).Biological process describes dynamics of the underlying biological system (e.g., receptor signaling).  The biological object is the subject of the perturbation (e.g., a specific biological receptor that is activated or inhibited). Action represents the direction of perturbation of this system (generally increased or decreased; e.g., ‘decreased’ in the case of a receptor that is inhibited to indicate a decrease in the signaling by that receptor).  Note that when editing Event Components, clicking an existing Event Component from the Suggestions menu will autopopulate these fields, along with their source ID and description.  To clear any fields before submitting the event component, use the 'Clear process,' 'Clear object,' or 'Clear action' buttons.  If a desired term does not exist, a new term request may be made via Term Requests.  Event components may not be edited; to edit an event component, remove the existing event component and create a new one using the terms that you wish to add.  Further information on Event Components and Biological Context may be viewed on the attached pdf. More help

Latin or common names of a species or broader taxonomic grouping (e.g., class, order, family) that help to define the biological applicability domain of the KE.In many cases, individual species identified in these structured fields will be those for which the strongest evidence used in constructing the AOP was available in relation to this KE. More help

An indication of the the relevant life stage(s) for this KE. More help

An indication of the the relevant sex for this KE. More help 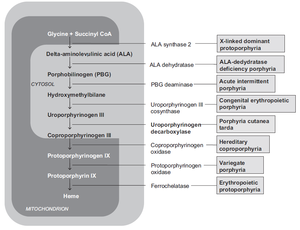 Porphyria is a disorder in which the disturbance of heme biosynthesis results in accumulation and excretion of porphyrins[1]. A variety of porphyrias exist depending on which enzyme in the pathway is deficient (Figure 1). In the case of chemically induced urporphyria, uroporphyrinogen decarboxylase (UROD), which converts uroporphyrinogen to coproporphyrinogen, is inhibited. In humans, this disorder is known as porphyria cutanea tarda and may be caused by chemical exposure or a hereditary deficiency in UROD[4]. The accumulation of porphyrins in the liver causes cirrhosis, mild fatty infiltration, patchy focal necrosis, and inflammation of portal tracts. When the activity of UROD is reduced to less than 30% of normal, the disorder manifests as an overt skin disease; the accumulation of porphyrins in the skin causes photosensitization that is characterized by fragile skin, superficial erosions, sub-epidermal bullae, hypertrichosis, patchy pigmentation and scarring[5].

A description of the type(s) of measurements that can be employed to evaluate the KE and the relative level of scientific confidence in those measurements.These can range from citation of specific validated test guidelines, citation of specific methods published in the peer reviewed literature, or outlines of a general protocol or approach (e.g., a protein may be measured by ELISA). Do not provide detailed protocols. More help

Porphyria is easily confirmed through a urinary or fecal analysis to measure the levels and pattern of excreted porphyrins. Samples are quantified using a high-performance liquid chromatograph equipped with a fluorescence detector[6]. Frank and Poblete-Gutiérrez[4] illustrate how the types of porphyria can be differentiated by the relative abundance of different porphyrins (Figure 2). Uroporphyria is the animal model equivalent to human porphyria cutanea tarda [5] 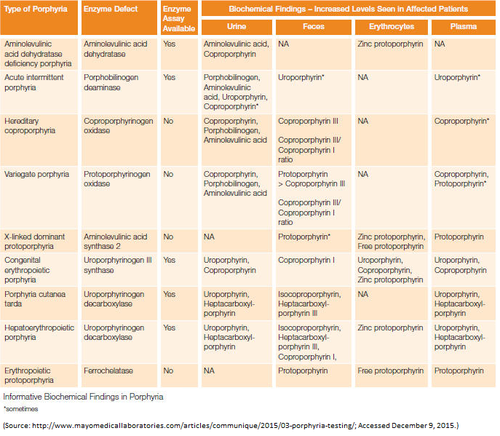 A description of the scientific basis for the indicated domains of applicability and the WoE calls (if provided).  More help

Chemical-induced uroporphyria has only been detected in birds[7][1][8] and mammals[5] , including an accidental outbreak in humans due to hexachlorobenzen-contaminated grain in the 1950s[9]. Fish are less susceptible to chemical-induced uroporphyria, but elevated levels of highly carboxylated porphyrins (HCP) have been documented in highly contaminated environments[10].

Regulatory Significance of the Adverse Outcome

An AO is a specialised KE that represents the end (an adverse outcome of regulatory significance) of an AOP. More help

Uroporphyria is a disorder affecting multiple organs and can significantly decrease the quality of life in humans.  The outbreak of porphyria in Turkish populations in the 1950's due to contaminated grain had significant, long-term health effects[9].

Uroporphyria has been detected in one wild animal population (Herring gulls in contaminated Great Lakes colonies[8]); although the disorder is characterized by hepatotoxicity, it has not been shown to lead to death, and therefore is not expected to cause population decline.  Elevated porphyrins however are apparent long before overt signs of toxicity are manifested, making it a sensitive biomarker of chemical exposure; monitoring porphyrin levels in at-risk wild populations would identify the need for remediation of contaminated sights before the occurrence of overt adverse effects.

List of the literature that was cited for this KE description. More help