To the extent possible under law, AOP-Wiki has waived all copyright and related or neighboring rights to KE:844 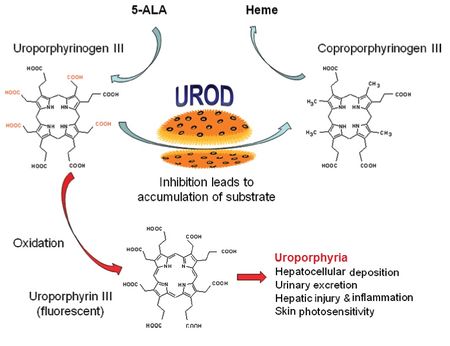 Uroporphyrinogen III is the first cyclic metabolic intermediate in the biosynthesis of heme. Under normal conditions, it is converted into coproporphyrinogen III by the enzyme uroporphyrinogen decarboxylase (UROD), and subsequently processed to heme following three further steps[1]. In the event that UROD activity is reduced (due to genetic disorders or chemical inhibition) uroporphyrinogen III, and other porphyrinogen substrates of UROD, are oxidized to highly stable porphyrins, which accumulation and lead to a heme disorder known as porphyria (Figure 1)[2].

Methods that have been previously reviewed and approved by a recognized authority should be included in the Overview section above. All other methods, including those well established in the published literature, should be described here. Consider the following criteria when describing each method: 1. Is the assay fit for purpose? 2. Is the assay directly or indirectly (i.e. a surrogate) related to a key event relevant to the final adverse effect in question? 3. Is the assay repeatable? 4. Is the assay reproducible?

Porphyrins fluoresce red when exposed to UV light; therefore, uroporphyrinogen oxidation (UROX) can be directly measured as uropororphyrin fluorescence in a spectrophotofluorimeter. UROX has been measured spectrofluorimetrically in avian[3] and mammalian[4] species.