To the extent possible under law, AOP-Wiki has waived all copyright and related or neighboring rights to KE:845 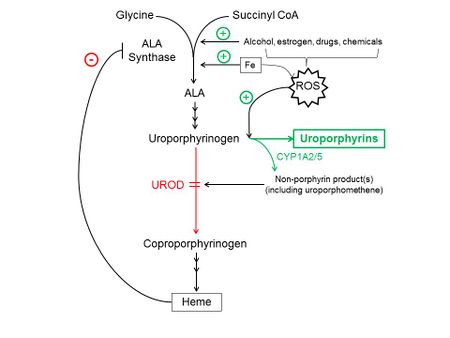 Figure 1: Disruption of the normal heme biosynthesis pathway by uroporphyrinogen decarboxylase (UROD) inhibition. Formation of the inhibitor (suggested as being uroporphomethene) is thought to require the action of the phase I metabolizing enzyme, CYP1A2. Synergistic induction of ALA synthase 1 and increases in oxidative stress (reactive oxygen species (ROS)), caused by alcohol, estrogens and xenobiotics, potentiate the accumulation of porphyrins and therefore the porphyric phenotype. (Modified from Caballes (2012) Liver Int. 32 (6), 880-893.)

Uroporphyrinogen decarboxylase (UROD) is the fifth enzyme in the heme biosynthesis pathway and catalyzes the step-wise conversion of uroporphyrinogen to coproporphyrinogen. Each of the four acetic acid substituents is decarboxylated in sequence with the consequent formation of hepta-, hexa-, and pentacarboxylic porphyrinogens as intermediates[1]. Impairment of this enzyme, either due to heterozygous mutations in the UROD gene or chemical inhibition of the UROD protein, leads to accumulation of uroporphyrins (and other highly carboxylated porphyrins)[2], which are normally only present in trace amounts.

Methods that have been previously reviewed and approved by a recognized authority should be included in the Overview section above. All other methods, including those well established in the published literature, should be described here. Consider the following criteria when describing each method: 1. Is the assay fit for purpose? 2. Is the assay directly or indirectly (i.e. a surrogate) related to a key event relevant to the final adverse effect in question? 3. Is the assay repeatable? 4. Is the assay reproducible?

Due to the high instability of porphyrinogens, they must be synthesized as an integral part of the enzyme assay for use as a substrate. Uroporphyrinogen can either be generated by enzymatic synthesis or chemical reduction[7]. The former makes use of bacterial porphobilinogen deaminase to prepare the porphyrinogen substrate and the latter often utilizes sodium amalgam or sodium borohydride under an inert gas. Chemical reduction however often involves large quantities of mercury or extremely alkaline conditions and requires significant purification before the enzyme assay can be performed. Bergonia and colleagues[8] suggest palladium on carbon (Pd/C) to be the most efficient and environmentally friendly chemical preparation of porphyrinogens as Pd/C is more stable than sodium amalgam and can easily be removed by filtration, eliminating the need for laborious purification.

Once uroporphyrinogen is synthesized it is co-incubated with UROD under standardized conditions. The reaction is then stopped, reaction products and un-metabolized substrate are esterified, and the porphyrin esters are separated and quantified using high performance liquid chromatography[7]. This enzyme assay classically utilizes milliliter quantities but has been modified to a microassay, minimizing cost and enhancing sensitivity[9].

Another method based on reverse-phase HPLC was developed[15]. This assay system uses either uroporphyrinogen III or pentacarboxyporphyrinogen I as substrate and liver homogenate in sucrose treated with a suspension of cellulose phosphate as enzyme source.

UROD inhibition has been measured in mouse[10] rat[11] and human liver[1], Japanese quail kidney[12] and chicken erythrocytes[13] and hepatocytes[14].