To the extent possible under law, AOP-Wiki has waived all copyright and related or neighboring rights to KER:868

A descriptive phrase which clearly defines the two KEs being considered and the sequential relationship between them (i.e., which is upstream, and which is downstream). More help

The utility of AOPs for regulatory application is defined, to a large extent, by the confidence and precision with which they facilitate extrapolation of data measured at low levels of biological organisation to predicted outcomes at higher levels of organisation and the extent to which they can link biological effect measurements to their specific causes. Within the AOP framework, the predictive relationships that facilitate extrapolation are represented by the KERs. Consequently, the overall WoE for an AOP is a reflection in part, of the level of confidence in the underlying series of KERs it encompasses. Therefore, describing the KERs in an AOP involves assembling and organising the types of information and evidence that defines the scientific basis for inferring the probable change in, or state of, a downstream KE from the known or measured state of an upstream KE. More help

Latin or common names of a species or broader taxonomic grouping (e.g., class, order, family) that help to define the biological applicability domain of the KER.In general, this will be dictated by the more restrictive of the two KEs being linked together by the KER.  More help

An indication of the the relevant sex for this KER. More help

An indication of the the relevant life stage(s) for this KER.  More help

Provides a concise overview of the information given below as well as addressing details that aren’t inherent in the description of the KEs themselves. More help

Include a description of the approach for identification and assembly of the evidence base for the KER.  For evidence identification, include, for example, a description of the sources and dates of information consulted including expert knowledge, databases searched and associated search terms/strings.  Include also a description of study screening criteria and methodology, study quality assessment considerations, the data extraction strategy and links to any repositories/databases of relevant references.Tabular summaries and links to relevant supporting documentation are encouraged, wherever possible. More help

Addresses the scientific evidence supporting KERs in an AOP setting the stage for overall assessment of the AOP. More help

WOE for this KER is moderate.

Addresses the biological rationale for a connection between KEupstream and KEdownstream.  This field can also incorporate additional mechanistic details that help inform the relationship between KEs, this is useful when it is not practical/pragmatic to represent these details as separate KEs due to the difficulty or relative infrequency with which it is likely to be measured.   More help

Uroporphyrinogen has clearly been identified as a substrate of CYP1A2/5, which results in its oxidation to uroporphyrin[1][2][3].

Provides specific (citable) evidence that supports the idea of a change in the upstream KE (KEupstream) leading to, or being associated with, a subsequent change in the downstream KE (KEdownstream), assuming the perturbation of KEupstream is sufficient. More help

Include consideration of temporal concordance here

UROX activity is increased by inducers of the CYP1A subfamily[4][1] and inhibited by substrates of CYP1A2[2], indicating that uroporphyrinogen binds to the active site of CYP1A2. Furthermore, mice with a higher endogenous level of CYP1A2 are more susceptible to porphyrin accumulation[5] and CYP1A2 knock-out prevents chemical-induced uroporphyria all-together[6][7][8]; therefore, CYP1A2 is essential for UROX. A mild porphyric response was observed in the presence of iron loading and 5-aminolevulinic acid (ALA; a heme precursor) in AHR-/- mice, indicating that CYP1A2 induction is not absolutely necessary, but that constitutive CYP1A2 levels are sufficient for UROX under certain conditions[9].

Addresses inconsistencies or uncertainties in the relationship including the identification of experimental details that may explain apparent deviations from the expected patterns of concordance. More help

It is worth noting that Cyp1a2(-/-) knockout mice have up to 40% of the UROX activity of Cyp1a2(+/+) mice[7], suggesting that some UROX activity is CYP1A2-independent. Likewise, transfection of human Cyp1a1, Cyp3a4, Cyp3a5, or Cyp2e1 in insect cells resulted in UROX activity[10], suggesting that UROX can be catalyzed by other CYPs than CYP1A2 both in mouse and human. Additionally, iron overload or other induced pathways can potentially induce UROX [13]. However, it was shown in mice that only CYP1A2-dependent UROX activity is associated with UROD inhibition[7]. No such experiment was conducted in human, therefore, uncertainties remain for that species.

Phillips et al.[11] were able to generate uroporphyria in a Cyp1A2-/- mouse model that is genetically predisposed (Hfe-/-, Urod-/+, which translates into intrinsic iron-overload and reduced UROD activity) to develop porphyria in the absence of external stimuli; CYP1A2 knockout alone prevented porphyrin accumulation, but with the addition of iron and ALA to the triple knockout, modest porphyria was observed. Therefore, under extreme porphyric conditions, UROX leading to porphyria can occur in the absence of the CYP1A2 enzyme.

Altogether, these results indicate that while CYP1A2 is a major catalysis of UROX activity, other CYPs and/or modulating factors are involved in the pathway.

This table captures specific information on the MF, its properties, how it affects the KER and respective references.1.) What is the modulating factor? Name the factor for which solid evidence exists that it influences this KER. Examples: age, sex, genotype, diet 2.) Details of this modulating factor. Specify which features of this MF are relevant for this KER. Examples: a specific age range or a specific biological age (defined by...); a specific gene mutation or variant, a specific nutrient (deficit or surplus); a sex-specific homone; a certain threshold value (e.g. serum levels of a chemical above...) 3.) Description of how this modulating factor affects this KER. Describe the provable modification of the KER (also quantitatively, if known). Examples: increase or decrease of the magnitude of effect (by a factor of...); change of the time-course of the effect (onset delay by...); alteration of the probability of the effect; increase or decrease of the sensitivity of the downstream effect (by a factor of...) 4.) Provision of supporting scientific evidence for an effect of this MF on this KER. Give a list of references.  More help

Iron status can profoundly modify the level of uroporphyrin accumulation especially in mice. In fact iron overload alone of mice will eventually produce a strong hepatic uroporphyria which is markedly genetically determined and toxicity can be ameliorated by chelators [15-16]. In human suffering from uroporphyrin accumulation, it was found that lowering body iron stores by bleeding or now chelators causes remission [17].

Cycling between the ferrous (Fe2+) and ferric (Fe3+) redox states allows Fe to catalyze the Haber-Weiss reaction, in which highly reactive •OH is generated from H2O2 and O2•−. Thus, by catalyzing the formation of reactive oxygen species, it is suggested that iron can increase the rate at which uroporphyrinogen is oxidized to uroporphyrin and therefore enhance uroporphyrin formation [18].

Quantitative Understanding of the Linkage

Captures information that helps to define how much change in the upstream KE, and/or for how long, is needed to elicit a detectable and defined change in the downstream KE. More help

Is it known how much change in the first event is needed to impact the second? Are there known modulators of the response-response relationships? Are there models or extrapolation approaches that help describe those relationships? 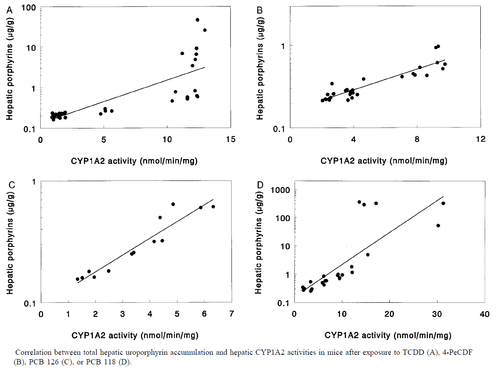 UROX is positively correlated with CYP1A2/5 activity[12] but this relationship has not been quantitatively describes. It has been noted however, that a CYP1A2 induction of just 2-fold dramatically induces porphyrin accumulation in iron-loaded mice[5].

Provides sources of data that define the response-response relationships between the KEs.  More help

Define whether there are known positive or negative feedback mechanisms involved and what is understood about their time-course and homeostatic limits. More help

A free-text section of the KER description that the developers can use to explain their rationale for the taxonomic, life stage, or sex applicability structured terms. More help

List of the literature that was cited for this KER description. More help