A name that succinctly summarises the information from the title. This name should not exceed 90 characters. More help
11βHSD inhibition, decreased population trajectory 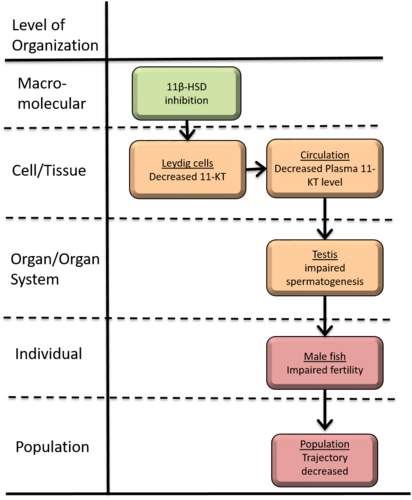 This AOP links inhibition of 11βHSD to reproductive toxicity in fish. This AOP describes impaired spermatogenesis that may result from the inhibition of 11βHSD. Chemical inhibition of 11βHSD, the molecular-initiating event (MIE), results in decreased 11-KT and cortisone synthesis. The reduction of 11-KT induces the cumulative cortisol by enzymatic conversion insufficiency of cortisone, which leads to decreased spermatogonial proliferation. Impaired fertility is a significant endpoint for evaluation of reproductive toxicity caused by endocrine disruption. It can be used as an endpoint for endocrine disruptor screening. Therefore, this AOP would be useful to identify chemicals with known potential to affect male fish fertility.

In fish spermatogenesis,11-KT is the main androgen in teleosts, where it has functions in spermatogenesis and their main action of 11-beta dehydrogenase(11βHSD Type 2)  is generally regarded as the induction of sperm maturation. it has also its role is to protect these tissues from an excess of cortisol. Stress conditions or inhibition of 11bHSD dehydrogenase activities result in a cortisol excess in the Leydig cells. A surplus of glucocorticoids causes delayed genomic repression of 11KT production through GR or a rapid nongenomic decrease in 11 KT production. The rapid depression has been hypothesized to occur via the putative plasma membrane corticosteroid receptor11βHSD2 is unidirectional with NAD+ as a cofactor. It is expressed not only in mineralocorticoid sensitive tissues such as testis.11βHSD has enzyme activities, metabolizing cortisol to cortisone, and 11 beta -hydroxytestosterone to 11-ketotestosterone (11-KT) which is the main androgen functions spermatogenesis. Especially, spermatogenesis can induce by 11-ketotestosterone(11-KT), a significant androgen in teleost. However, excess circulating cortisol, which is produced by 11β-hydroxylase and decline of 11KT by 11βHSD inhibition, leads to inhibition of the DNA replication in spermatogonial mitosis, gonadal function, and spermatogonial proliferation in male fish.

Acknowledgements: This research was supported by the National Research Council of Science & Technology(NST) grant by the Korea government (MSIP) (No. CAP-17-01-KIST Europe)

11KT has functions in spermatogenesis and their main action of 11βHSD Type 2 is generally regarded as the induction of sperm maturation thus,This AOP will start with reviews about inhibitors of 11βHSD2 as MIE. Stressors for inhibiton were found in table and 11βHSD1 inhibitors were also denoted in previous studies (Jana Vitku et al 2016) . We will further find KERs with Androgen antagonisms and their impact on male fish.

Chemical: This AOP applies to inhibitors of 11KT (Androgen antagonists). Compounds which can bind the 11βHSD as follows

Sex: The AOP applies to males only.

Life stages: The relevant life stages for this AOP are reproductively mature spermatogenesis.

Taxonomic: At present, the assumed taxonomic applicability domain of this AOP is iteroparous teleost fish species.

A decrease in 11keto levels leads afterward to adverse changes in spermatogenesis. Therefore, it seems that 11βHSD  could be a target for EDs and this could be one of the possible mechanisms of endocrine disruption in the testis that leads to impaired spermatogenesis. Consequently, this AOP can be applied to the prediction of VMG-eco and relevant to EDTA caused by the inhibition of 11β-HSD.