Binding of antagonist to NMDARs can lead to neuroinflammation and neurodegeneration 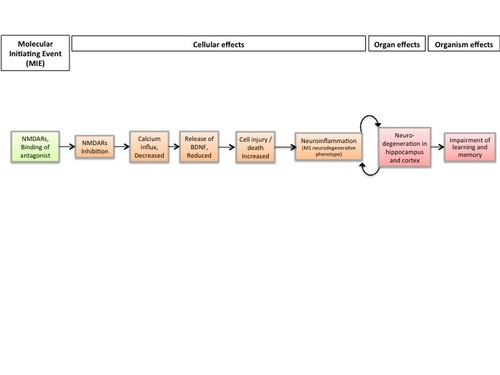 Acknowledgments: The authors greatly acknowledged the contribution of Drs Anna Price and Magda Sachana who prepared the MIE and KE1-KE4 as well as the related KERs of this AOP.

This AOP is based on the hypothesis of Landrigan and coworkers (2005) proposing an early origin of neurodegenerative diseases in later life. The chemical initiator known to block NMDARs and used in this AOP for the empirical support is lead (Pb), which is a well-known developmental neurotoxicant. In epidemiological studies of adults, cumulative lifetime lead exposure has been associated with accelerated decline in cognition (Bakulski et al., 2012), suggesting that long term exposure to lead during brain development or occupational exposure in adulthood increases the risk to develop a neurodegenerative disease of Alzheimer's type. The long latency period between exposure and late-onset of neurodegeneration and cognitive deficits gives a very broad life-stage applicability, where developmental exposure has consequences in the aging brain. Such a long temporal delay between exposure and adverse outcome is a real difficulty and challenge for neurotoxicity testing. As the Key Event « Neuroinflammation » appears to play a crucial role in the neurodegenerative process, the authors propose to include the measurement of this apical KE in the battery of regulation-required neurotoxicity testing.


The aim of this AOP is to capture the KEs and KERs that occur after chronic binding of antagonist to NMDA receptors in neurons of hippocampus and cortex during brain development and that lead to neurodegeneration with impairment in learning and memory in later life.  Neurodegenreation with accumulation of amyloid plaques and hyperphosphorylated tau, as well as cognitive deficit are associated with Alzheimer-type neurodegeneration. Currently, the hypothesis of Landrigan et al., (2005) of developmental origins of neurodegenerative diseases has been demonstrated in monkeys, in rats, mice  and in zebrafish following Pb treatment (Zawia and Basha, 2005; Basha and Reddy, 2010; Bihaqi et al., 2014a; Bihaqi et al., 2014b ; Lee and Freeman, 2014). There is strong agreement that Alzheimer's disease is progressive and that neurodegeneration is occuring mainly in hippocampus and cortex, associated with cognitive deficits (Schoemaker et al., 2014). This AOP uses the MIE and several KEs of the AOP 13 entitled "Binding of antagonist to N-methyl-D-aspartate receptors (NMDARs) during brain development induces impairment of learning and memory abilities ", with an additional KE: neuroinflammation and two AOs: an AO at the organ level: Neurodegeneration in hippocampus and cortex and an AO at the organism level: Impairment of learning and memory.  Impairment of learning and memory is the same AO as in AOP 13, but the point is that this AO is detected when the brain is aging, and it is due to neurodegeneration with accumulation of amyloid peptides and tau hyperphosphorylation. The recent review by Tartatglione and coworkers (2016) is a very good summary of the challenges and experimental studies described in this AOP.

Developmental Pb exposure has adverse effects on cognitive functioning that can persist into adulthood and may be exacerbated with aging (Schneider et al., 2013). Such delayed effects may be due to epigenetic effects of developmental Pb exposure on DNA methylation mediated at least in part through dysregulation of methyltransferases observed often at the lowest level of exposure (Schneider et al., 2013). In addition, key neurodevelopmental events, such as neural differentiation, cell migration and network formation may be modulated by Pb exposure, predisposing the brain for alterations in higher brain functions, such as learning and memory, and this at different ages (for review, see Aschner et al., 2017). The fact that neuroinflammation triggered during early brain development was shown to cause Alzheimer-like pathology when aging (Krstic et al., 2012), suggests that chronic neuroinflammation may play a causal role in cognitive decline in aging. A recent report described a mechanistic link between chronic inflammation and aging microglia; and a causal role of aging microglia in neurodegenerative cognitive deficits: A sirtuin 1 (SIRT1) deficiency was observed in aging microglia, leading to a selective activation of IL1-b transcription mediated through hypomethylation of IL-1b proximal promoter exacerbating aging or tau-associated cognitive deficits (Cho et al. 2015). Taken together, these data suggest that Pb-induced neuroinflammation during brain development may underlie the delayed effects on cognitive deficits in aging, as depicted in the proposed AOP

This AOP is not sex dependent. Regarding the life stage applicability, MIE induced during brain development can have consequences when brain is aging, according to the hypothesis proposed by Landrigan and coworkers (2005). However, it is also possible that the AO does not depend exclusively on developmental exposure, since cumulative occupational exposure also decreased cognitive functions in aging (Stewart et al., 2006).

1. Concordance of dose-response and temporal concordance between KEs and the AO

It is difficult to analyze the dose-response relationships between the different KEs, (i) because of the long temporal delay between MIE and AOs ; (ii) because no study has analyzed them simultaneously, and (iii)  because of the difficulties in extrapolating in vitro to in vivo data. As the apical KEs and AO occur and can be measured years after exposure, even when Pb blood level has returned to normal, measurement of bone Pb content has been proposed as a measurement of historical Pb exposure in adults (Bakulski et al., 2012, 2014).  The following table gives an overview of the doses/concentrations and exposure duration at which the different KEs were measured.

2. Strength, consistency and association of AO and MIE

The accepted molecular mechanism of action of the chemical initiator Pb is inhibition of NMDARs (Alkondon et al., 1990; Gavazzo et al., 2001, 2008; Guilarte et al., 1992; Omelchenko et al., 1997) and several experimental studies in rat, monkey and zebrafish linked chronic exposure to Pb during brain development to Alzheimer's-like neurodegeneration with cognitive deficits (Zawia and Basha, 2005; Basha and Reddy, 2010; Bihaqi et al., 2014a; Bihaqi et al., 2014 b; Lee and Freeman, 2014). This AOP is defined by a single environmental chemical, Pb. However, other NMDAR antagonists used as general anesthetics (MK 801, phenylcyclidine, ketamine) applied during brain development may also lead to functional impairments in cognitive domains relevant to memory. The effects of these anesthetics on brain function appear to have a delayed onset, and can be very long-lasting if not permanent. In general, longer durations, higher concentrations and longer or repeated exposures tend to exacerbate impairments (for review, see Walters and Paule, 2017). The mechanisms underlying anesthetic-induced neurotoxicity are unclear, but several hypotheses have been proposed: impairment of mitochondrial integrity and function, dysregulation of intracellular calcium and neuroinflammation have all been implicated (Lei et al., 2012). Some of these mechanisms are common to the KEs described in this AOP, suggesting that such delayed effects on memory processes can be a general consequence of developmental brain exposure to NMDAR inhibitors. However, no studies have yet reported that these other NMDAR inhibitors cause amyloid plaque deposition or tau hyperphosphorylation associated with Alzheimer-like neurodegeneration when aging.

Interestingly, memantine, a NMDAR antagonist used in the treatment of Alzheimer's disease, was shown to improve cognitive functions (for review, see Dekundy, 2006). This might be considered as a discrepancy with the described AOP considering Pb as an antagonist of NMDAR and its potential risk to cause cognitive deficits and amyloid plaque accumulation, which are hallmarks of Alzheimer's disease. However, memantine antagonism of NMDAR is quite different (low affinity and voltage-dependent) and the window of exposure differs completely, since memantine is applied in aged patients when the disease has broken out; whereas the risk of delayed neurodegeneration described in this AOP is due to NMDAR inhibition during brain development.

With an Adverse Outcome occurring after such a long delay after the MIE, it is extremely difficult to make a quantitative link, since the AO can occur when serum Pb levels have returned to normal. Bakulski and coworkers (2012) therefore proposed measuring Pb bone content as an index of historical Pb exposure. Similarly, Schwartz and coworkers (2000) showed that tibia Pb levels were good predictors of delayed cognitive decline of former organolead workers. Thus, Pb blood level is rather representative of acute exposure, whereas Pb bone level represents long-term accumulation (Dorsey et al., 2006).

This AOP aims at giving a conceptual framework to mechanistically understand an apical hazard, which can occur long after initial exposure; this hazard is not captured in standard regulatory neurotoxicity testing.

Creeley CE, Olney JW. (2013) Drug-Induced Apoptosis: Mechanism by which Alcohol and Many Other Drugs can Disrupt Brain Development. Brain Sci. 3: 1153–1181.

Niranjan R. 2014. The role of inflammatory and oxidative stress mechanisms in the pathogenesis of Parkinson's disease: focus on astrocytes. Mol Neurobiol 49(1): 28-38.